5 common interfaces for image transfer you should know 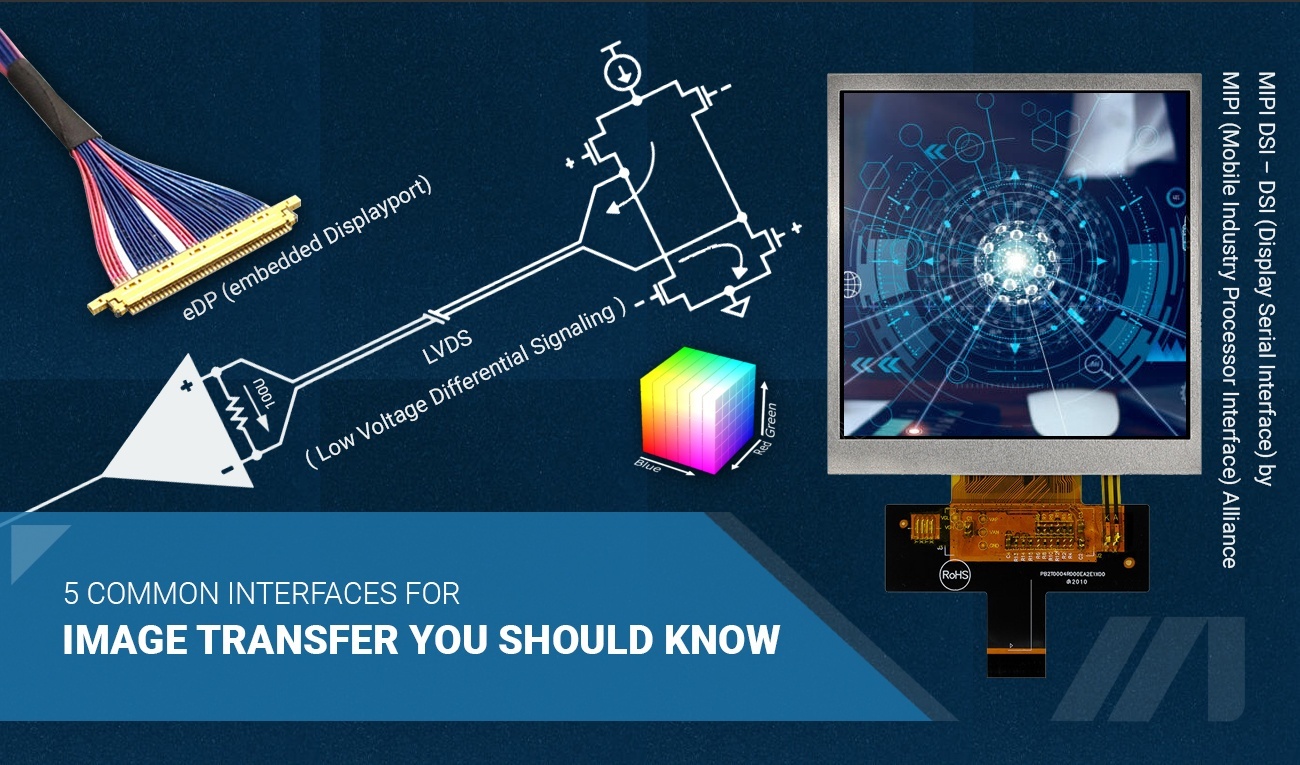 Some of the key technologies used across all industries are interfaces that transfer different types of data between devices – for example, images. Such transfers are based on providing data (for instance, processors/controllers or computers) and devices that present such data – for example, displays or monitors.

When talking about interfaces, we refer to the process of connecting devices we use to transfer data. They are essential to presenting content on visual information carriers such as LCD TFT screens.

In this article, we take a closer look at the most popular interfaces used for image transfer today to show you the pros and cons of each technology and help you understand which could be a good match for your next application. Read on to find out more about the cutting-edge technologies used today for transmitting images.

When it comes to interfaces, we can divide them into two separate groups: internal and external solutions.

In internal solutions, users directly connect components of the same device that is usually set in the same enclosure as the controller and display. These are interfaces for image transfer but can also transfer other data. Examples include RGB, LVDS, MIPI DSI, and Vx1.

In these solutions, two separate devices are connected by a cable – for example, a computer and a monitor. Examples include HDMI, DVI, VGA, or DP.

Another way to divide interfaces is by taking into account the type of data transmission they allow:

However, as display technologies developed, these interfaces have changed as well. Today, many applications use the RGB interface for resolutions lower than 1280×800 px and the LVDS interface for displays with resolutions above 320×240 px. Today’s use of advanced microprocessors and microcontrollers also upgraded the RGB or LVDS drivers, which simplifies the process of implementing LCD TFT displays in applications.

Let’s take a look at the most popular interface types to discover their unique characteristics.

This type of interface is based on parallel data transfer through at least a few wires. Every line can transmit 1-bit information that determines the intensity of the RGB color of a given pixel.

Depending on the type of RGB interface you’re working with, you will see different requirements as to the number of wires. For example, 24-bit variants of RGB interfaces may require manufacturers to use 24 wires for every pixel.

The primary benefit of using the RGB interface is its performance. It offers a bandwidth estimated at up to 1.2 GB/s. However, achieving this value means that you need to use more wires in a single configuration. As a result, you will be facing the problem of hiring emissions from electromagnetic interferences. This needs to be solved by engineers to avoid any issues in the application’s performance.

When used for image transfer, this type of interface requires differential pairs – one for clocking signal transfer and three for transferring data. The LVDS interface offers simplex and serial communication where every bit of data is transmitted in one direction and in a row. The data is transferred as the difference between voltages on a pair of wires. It’s then compared at the receiver.

The primary benefit brought by LVDS interfaces is their performance. Most of the time, LVDS interfaces are used in point-to-point topology where there’s one transmitter and one receiver. In this case, it provides the bandwidth of up to 3.125 GB/s – even when the devices are at a distance of a few meters.

Moreover, this interface type is relatively resistant to electromagnetic interferences. At Melrose Systems, we offer a wide range of LCD TFT that support the LVDS interface – take a look here to learn more about our standard and widescreen solutions.

This interface was created by VESA – Video Electronics Standards Association – to be implemented in consumer electronic devices with LCD TFT displays embedded in them. The interface gained a lot of traction, especially in the computer industry.

Today, eDP interfaces are slowly taking over the LVDS interfaces. However, the interface isn’t commonly found in microprocessors or microcontrollers.

The technology is based on DP – the display port standards. These, in turn, are based on differential pairs of signals. One pair is used to clock the signal transfer, and at least one pair is used for data transfers. There are also half-duplex AUX channels for configuring the LCD TFT controllers.

The bandwidth this interface can achieve can be even up to 1.62 GB/s. Note that the eDP interface is also relatively resistant to electromagnetic interferences.

The technology was created by MIPI for implementation in portable devices such as tablets, smartphones, and laptops. However, it can also be used in other applications like mobile measuring devices.

This interface is also based on differential pairs of signals, providing full-duplex communication in both directions. The data is transferred as compressed packages that use two different modes of data synchronization:

The primary benefits of MITI DSI is high efficiency, low power consumption, and total immunity to electromagnetic interferences. At Melrose Systems, we offer LCD TFT displays with the MITI DSI interfaces to match the most demanding use cases.

Together with new technology advancements, more and more companies demanded interfaces that would be even more resistant to electromagnetic interferences than the commonly used LVDS. This is where the Vx1 interface comes in.

Developed by Thine Electronics, the Vx1 image transfer standard is similar to the one found in LVDS. However, Vx1 offers low production costs and provides a high speed of data transfer. It can achieve even 840 MB/s for each differential pair of wires that can be located even at a distance of 10 m.

This type of interface is an asynchronous solution because the clock signal is transferred through data wires. There are no clock signal wires. As a result, the total number of wires is lower.

For example, to get a screen like Cinema-FHD of 2560×1080 px resolution with a 13-bit color depth and 120 Hz refresh rate, you need to use 24 pairs of wires if you’re working with an LVDS interface. If you choose the Vx1 interface, you will only need 4 pairs of wires. One of the key manufacturers of Vx1 interfaces is Litemax, available in our LCD TFT display offered.

We hope that this article helped you to gain a better understanding of the current technology solutions used in LCD TFT displays.

If you’re looking for a reliable provider of such displays with different interface options, get in touch with us. At Melrose Systems, we develop display solutions matching demanding, modern requirements.

Submit your requirements
On Order

Melrose will notify you by e-mail of the expected delivery date as soon as delivery information has been confirmed by the factory. Backordered items are shipped complete once they arrive in stock. If you prefer to have each item shipped as they arrive, simply advise us by replying to your backorder notification e-mail.

If more than one shipment is necessary to complete your order, Melrose will pay for the first pound on any backorder shipping UPS  ground, within the United States. For International backorder rates, check our shipping estimator.

We have sent an email with the membrane switch design guide. Check your inbox.